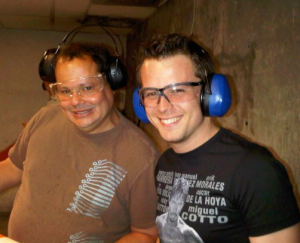 In my case, I found two, Travis Kalanick and Gary Kremen.  Gary Kremen was just starting Clean Power Finance in a grimy alley between SOMA and the Mission when he emailed me out of the blue asking to be a customer of our new service.  I had mentioned in my bio on our corporate website that I loved the TV show The Wire and Gary liked it too. We met in person and hit it off immediately.  His use case never really made sense for us so he never actually became a customer, but it didn’t matter.  He loved our business model and started meeting with me regularly. 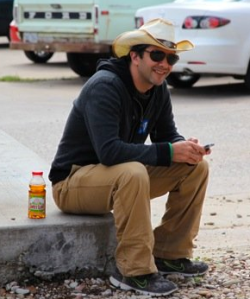 Travis had recently sold his company to Akamai when he found CrowdFlower’s blog.  Desperate for customers, I put my cell phone number on our blog and he literally called out of the blue.  We met up along with my business partner later that day.  At the time I was single and living off a diet of ramen and burritos.  Travis would invite me over regularly to eat his girlfriend’s amazing cooking while he told me crazy stories about his experiences with VCs.

After I started CrowdFlower it took me months to get our first customer and over a year to raise an angel round.  I was totally unprepared for the amount of rejection I would face.  I was terrible at explaining my business.  I remember Aydin Senkut cutting me off right in the middle of my pitch to tell me he would save us all time by giving me a quick no (he later invested).

One of hardest things for me was becoming comfortable with the bigness of my idea.  Elements that were crucial to my business strategy, such as our crowdsourcing channel strategy where we post tasks on offerwalls and other sites, seemed too big and crazy so I would often omit them from my pitch altogether.

Another major challenge was the amount of criticism I faced daily.  I walked away from most meetings feeling terrible.  Every smart person I met with poked holes in my idea, because my idea had a lot of holes in it.  And I felt the criticism a lot more strongly than I felt the praise.  I was surprised when, after I raised my angel round, a number of investors who I had assumed hated my idea after meeting with them asked why I hadn’t offered to bring them into the deal.

I didn’t need Travis and Gary to teach me how to make a pitch deck and how to structure a Series A – even back then anyone could figure out the basics from Venture Hacks – but I desperately needed them to push me to tell my story with confidence and really believe that I had a billion dollar idea in my hands.  I think nearly every first time founder needs this push and when I ask successful founders they almost always had their own irrationally supportive mentor early on.

So how do you find an irrationally supportive mentor?  My old boss Barney Pell says that the most important thing is to tell the world loudly what you are trying to do and then people that can help come out of the woodwork.  I think it’s telling that Travis and Gary didn’t reach me from a startup networking event or a friend of a friend.  They came from my website, which violated every marketing principle in the world but spoke with an authentic voice.

Equally importantly, how can you tell if you’ve found an irrationally supportive mentor?  When I started CrowdFlower, I had a lot of smart, experienced friends who wanted to help me.  But I walked out of every meeting with them feeling drained.  They helpfully pointed out all the issues with my business – some of which are issues even today.  An irrationally supportive mentor is irrational, ideally even more irrational than you.  Travis and Gary definitely were.  After a year of failing to fundraise Travis pushed me to go into a meeting with a prominent investor and tell him the deal was closing fast and he needed to make his mind up within two days.  Gary pushed me to hire experienced people on zero salary for the opportunity to get into CrowdFlower on the ground floor.  When a crucial sale fell through, Travis got me drunk and told me stories of all the insane things that had happened at his last company.

How do you keep an irrationally supportive mentor?  One easy, overlooked strategy is simple appreciation.  I’ve helped a ton of friends, acquaintances and people who have cold-emailed me to find investors, customers and startups to invest in.  I feel a responsibility to pay forward all the help that I got in the early days of CrowdFlower and one of the awesome things about living in San Francisco is how many early stage startups there are.  But after all this time, I’m still struck by how nice it is when people write back to tell me they’ve closed a round or a deal and acknowledge my help.  So thanks, Gary and Travis.

View all posts by lbiewald